One of the highlights of our Norway trip was the hike to Trolltunga. Trolltunga is the rock formation at the finale of the hike and is named so for its resemblance to a troll’s tongue. It juts out from the side of the cliff and lies 2,300 ft over Lake Ringedalsvatnet with glimpses of the Folgefonna glacier in the distance.

We stayed in Tyssedal the previous night, just outside of Odda in Hordaland county. I would recommend making accommodations near Tyssedal since the trailhead is only 20 to 30 minutes away, depending on how acclimated you are to driving their notoriously windy roads. We made our way over in the early morning, and were greeted by an outdoor adventure company known as Trolltunga Active. They offer activities such as guided hikes to Trolltunga, zip line and river gorging adventures, and guided climbs of Tyssedal Via Ferrata. If you’re asking yourself what a Via Ferrata route is, make sure you make your way over to my previous post about Via Ferrata Loen.

We felt sufficiently prepared for the 13.6 mile hike so we planned on guiding ourselves. The hike is graded as challenging and your opinion on that may vary depending on your hiking experience. The most difficult terrain is at the beginning of the trail, with over a half mile of stone steps and steep rock slab. Ropes are occasionally tied to trees in this section for assistance along the trail. Once we began to reach more level ground, we felt as if we were on a different planet. The landscape was mostly flat, with small streams of water crawling their way back toward the mountainside. Before climbing up another steep section, we came across a small number of houses, each a bit isolated from the rest. We questioned how these people traveled to and from their home, but later learned of a small road that allows locals to access their homes and up to 30 additional cars per day to drive up the first ascent and park. We weren’t the earliest to arrive so it likely wasn’t an option for us anyway, but after experiencing those unforgiving stone steps, I could see how this alternative would be tempting. 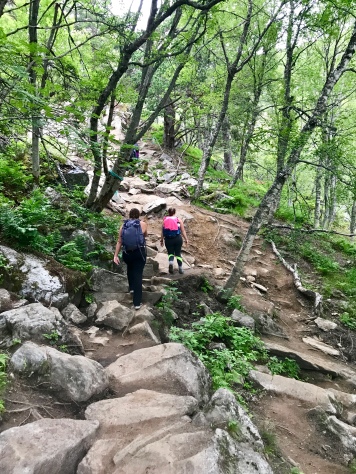 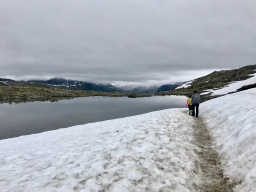 When we made it to the top of the fjord, we hiked parallel to Lake Ringedalsvatnet as we headed toward Trolltunga. The water was beautifully blue and still with remnants of the past winter in sight as sections within the fjord were still iced over. The weather wasn’t optimal as it was overcast with a light drizzle, but thankfully that meant less of a crowd on the trail. 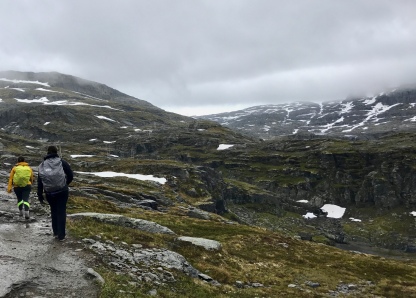 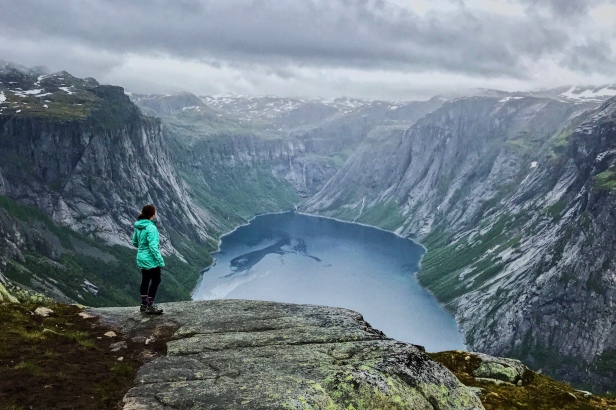 At last, we approached our destination. Beyond the small crowd of hikers was a breathtaking view of the fjord! We had to wait in line for a few minutes to get a solo picture at the tip of the troll’s tongue, but it was well worth the wait. Some hikers took a seat and inched their way toward the edge. I contemplated it for five seconds and ultimately decided I would be satisfied with not going that route. In the end, we were ecstatic to see the view we were anticipating for months and our photos turned out great! 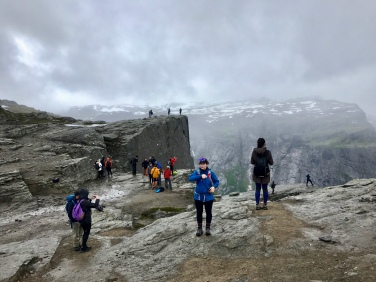 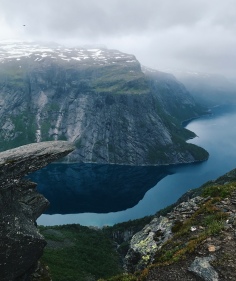 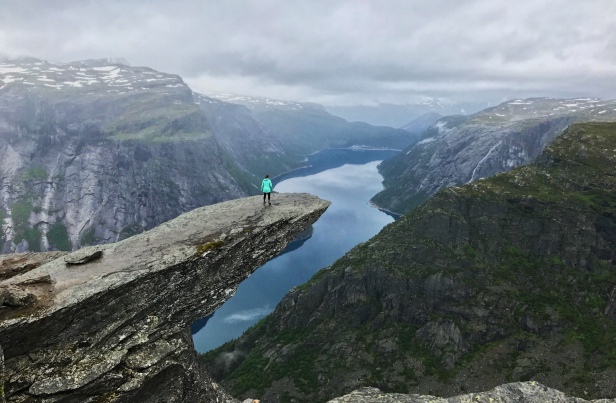 The hike took up the majority of the day – about 9.5 hours in total, including the wait for the photo op. Hiking on top of the fjord was a unique experience though, and I was glad to avoid the crowd on this day. If I were to get another go at this hike, I would choose to camp somewhere along the way. Going this route would allow you to spend some time at Trolltunga without the crowd and potentially catch both a beautiful sunset and sunrise. Either way though, standing at the rock’s edge and staring down the fjord will surely take your breath away and give you a greater appreciation for the country.